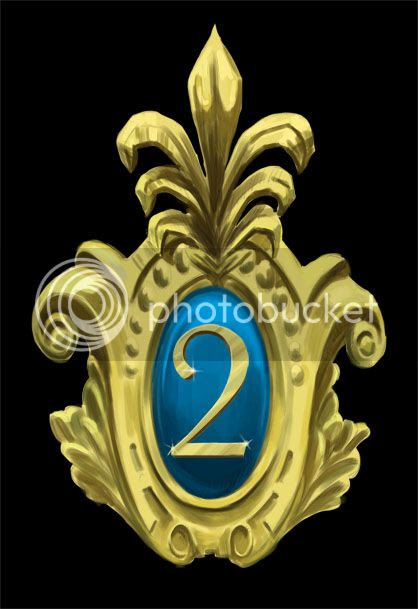 The Roxy Compendium - Book 2
Posted by Leighton Johns at 7:07 am 0 comments


The final stage of the development of my Railsea cover called for me to come up with a suitable colour palette and custom lettering for the title. As I'd been asked to work on the book based on other covers I'd created in the style of vintage movie posters and pulps, it made sense to mine this rich vein some more.

The colourway below came about from me noticing what a common combination this intense orange/red with a cobalt blue was in the advertising and magazine cover design of the 30s. They are complimentary colours and so are naturally seen together no matter what the decade, but they seemed particularly common in this saturised form in the 30s and 40s. 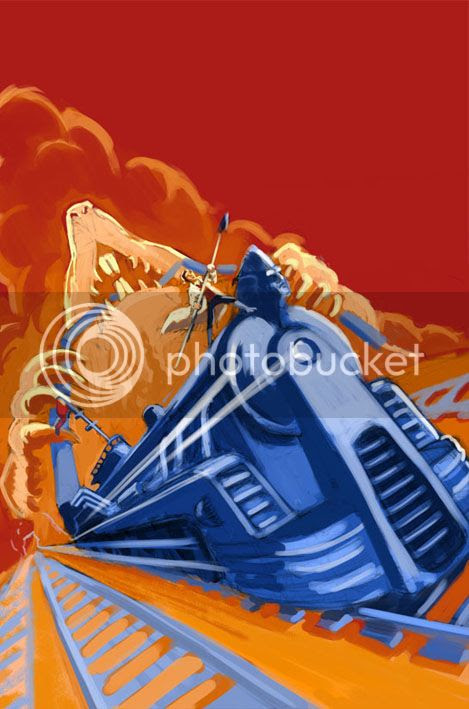 This colour combo looked incredibly intense to me after submitting it and I didn't expect my Art Director to buy into the idea, but surprisingly they loved it.

When it came to submitting a second colour rough (with some alterations to the colours and train design) I still had not looked seriously at developing custom lettering for the title. Wanting to suggest the area to be used for the title however I quickly cut and pasted something together from a poster for 40s seafaring adventure movie Reap the Wild Wind. 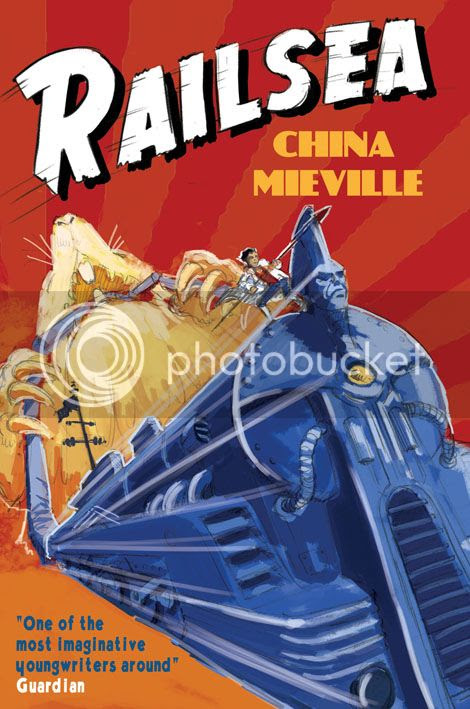 I hadn't really intended this to be the final look for the title but once again the design team liked it and wanted something pretty close to this for the final cover. To help refine the lettering I turned to pulp cover design again, this time Air War - 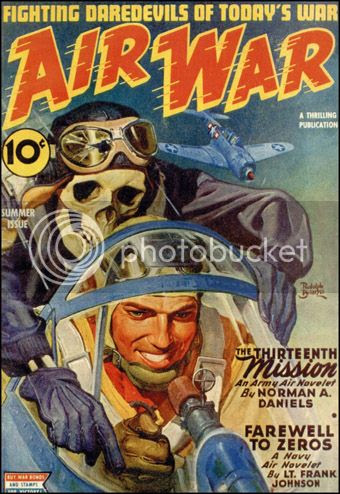 Below is my final concept for the cover including finished lettering, as submitted to Pan Macmillan. Before it went to print the Blue colour of the title would revert to the original white of the rough, and the 'pulpular' type used for the author credit would be replaced by the distressed font used for the Mieville adult covers (to keep an association with the brand). Nevertheless this is pretty close to the cover you'll find on the shelves. 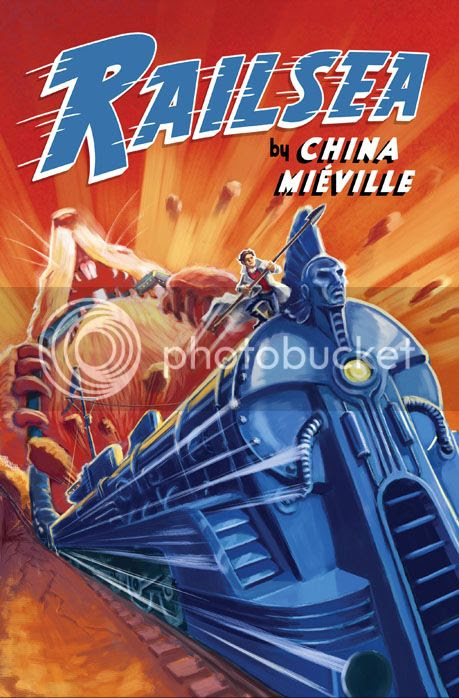 Railsea is available now from your local bookstore, or online. You can still read the first two chapters online here. 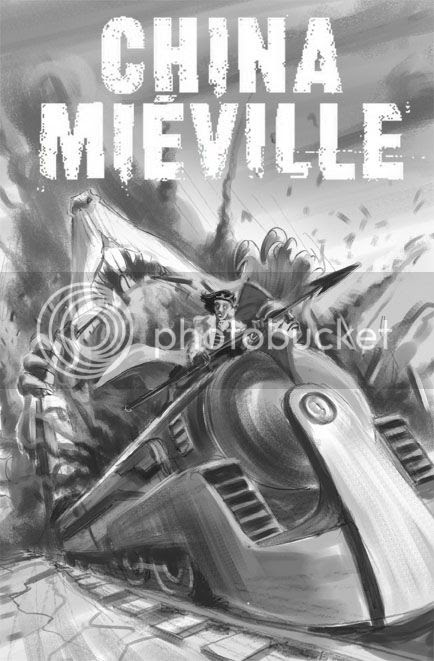 Above is the rough sketch that was chosen as the second route (see my previous post for route 1) to develop for the cover of China Mieville's Railsea. The finished illustration doesn't actually look very different from this initial sketch, but that's not to say I didn't tinker with it endlessly before returning to the original look.

I tried a few variations on the design of the train itself. Part of my inspiration for the redesign were the vintage rail posters that had guided the composition, but another were illustrations of futuristic transport and machinary from science and technology magazines of the 30s. Modern Mechanix had a very particular take on the future. Their covers saw the technology of tomorrow as being beautifully rounded to the point of being bulbous... and red, everything was going to be red in the future apparently. 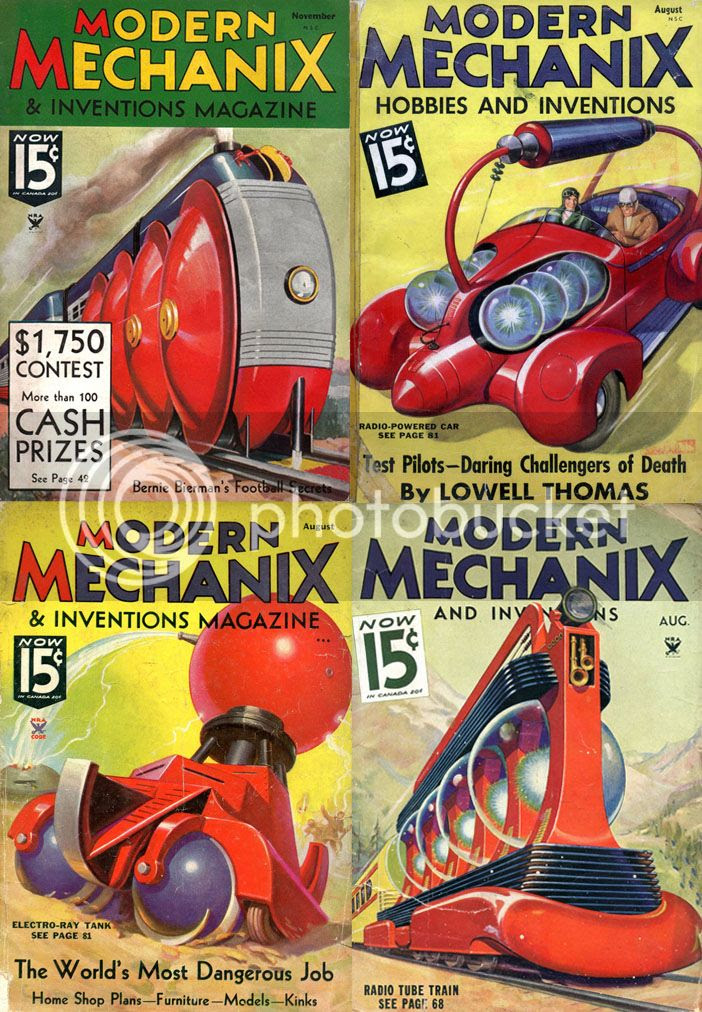 So I did my Modern Mechanix version of the Mole train Medes. There was a little inspiration too from the Geo Ham motoring illustrations - the chrome side exhausts and the wheel arch styling borrowed from a Delahaye coupe. I wanted to make reference to marine vessels in the design too. This was Rail-sea afterall, and the story itself plays on the story of Melville's Moby Dick. To this end I placed what is essentially the conning tower from a U-boat near the rear of the engine. Out of this protrudes a mast flying a flag, though I didn't go as far as adding sails. 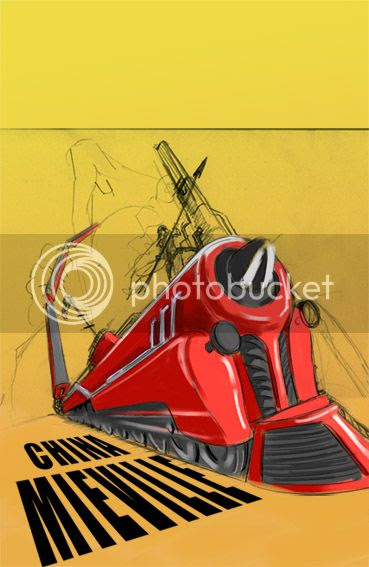 I was quite pleased with this look but it didn't go down so well when I asked friends for their opinion. Everyone felt it was overdesigned and just had too much going on. I have to admit that the teardrop styling and red paintwork probably didn't fit very well with the concept of the train being a vessel for hunting giant Moles. It looks more like the sort of thing a Railsea-world movie star would have taken out for a leisurely cruise.

I was casting around again for moletrain inspiration when I came across the vintage rail illustration below by Alexander Leydenfrost. It shows the distinctive Pensylvania Railroad T1 Locamotive, streamlined by Raymond Loewy. 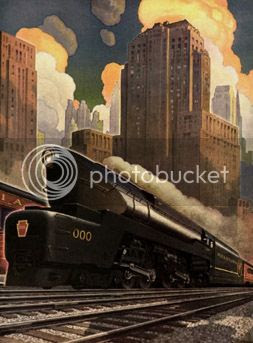 I thought the distinctive wedge shaped nose of the train had something of the look of a U-boat design or possibly the prow of a ship... once again the seafaring connection. It felt like it would make more of a pared down, raw and dangerous vehicle than the portly scarlet predecessor. I also thought the nose design seemed to echo the shape of the Mole, an idea that I liked.. but that may just be me, I probably had moles on the brain by this stage. 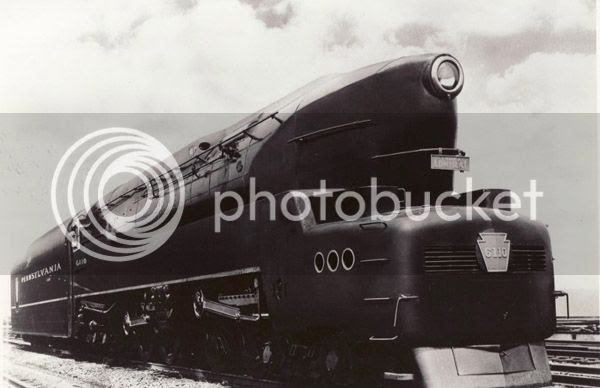 I worked up a rough based on my initial route 2 composition, but adding my T1 inspired Moletrain. I'd been asked to take a look at the design of the type for the title too, and found that if I flipped the illustration I could possibly work the title into the tracks running alongside.

I thought I could simplify the design further by limiting the palette to just three colours. I then went even further by suggesting two duotone colourways, which I felt could look quite cool and very striking. 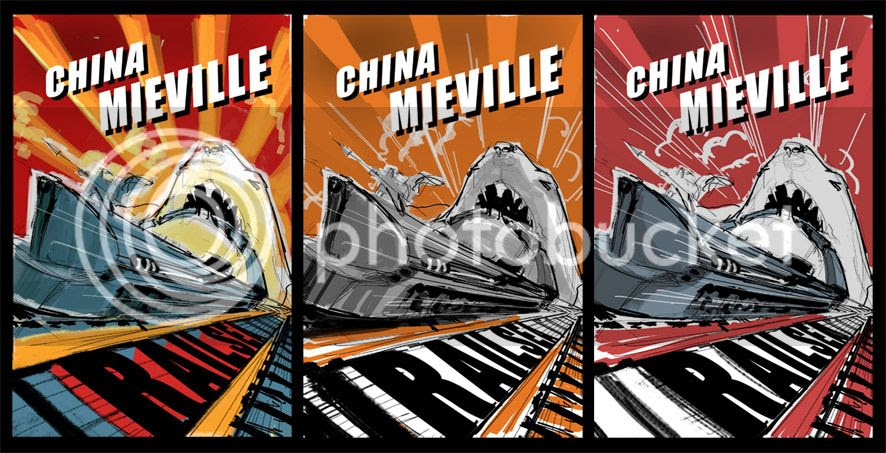 All of this may have been one design change too many however. The panmac design team liked the new sketches but were still really sold on the initial black and white rough sketch I'd shown them, including that pretty simple train design. If 'it ain't broke don't fix it' was the feeling I got, and with the deadline looming I was happy to go with this. So it became a case of going back to the rough and making as good a colour interpretation of that as possible. 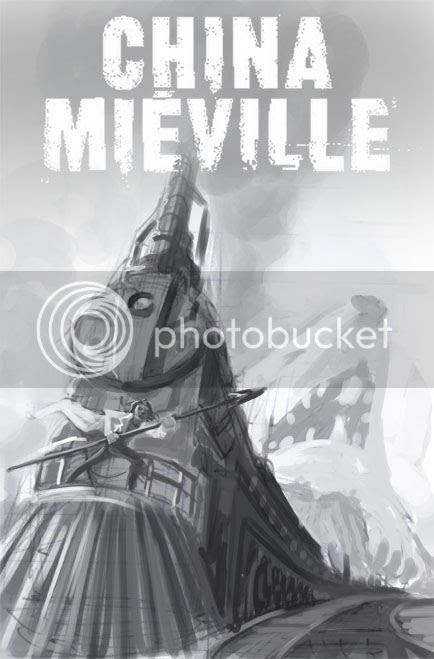 Of the number of initial sketches I submitted for the recent Railsea cover (see last post) the example above was one of two that Pan Macmillan's art director Rachel Vale selected for development. 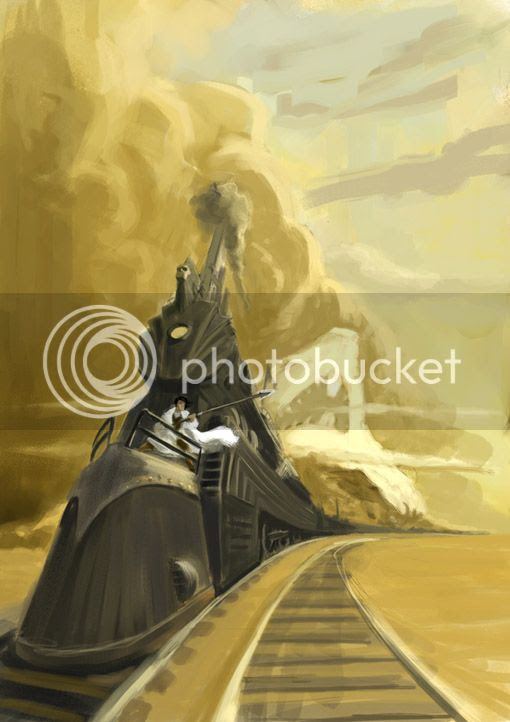 My initial colour rough for this route (above) just seemed a too predictable, a bit of a pale Ashley Wood or Jon Foster imitation, likely to to get lost amongst a sea of other similarly sepia tinted steampunk covers.

I went back to the source of inspiration suggested by the brief. I wondered if those modernist and art deco rail posters that had suggested the composition and foreshortened speeding trains might also suggest a 'new' palette and a fresh approach to my mark making that would help the cover stand out.

Another point of reference for me were the vintage motoring posters of illustrator Geo Ham. These images seemed to capture the excitement and dynamism that the brief required, but also looked quite different from what you might normally find on a fantasy book cover. 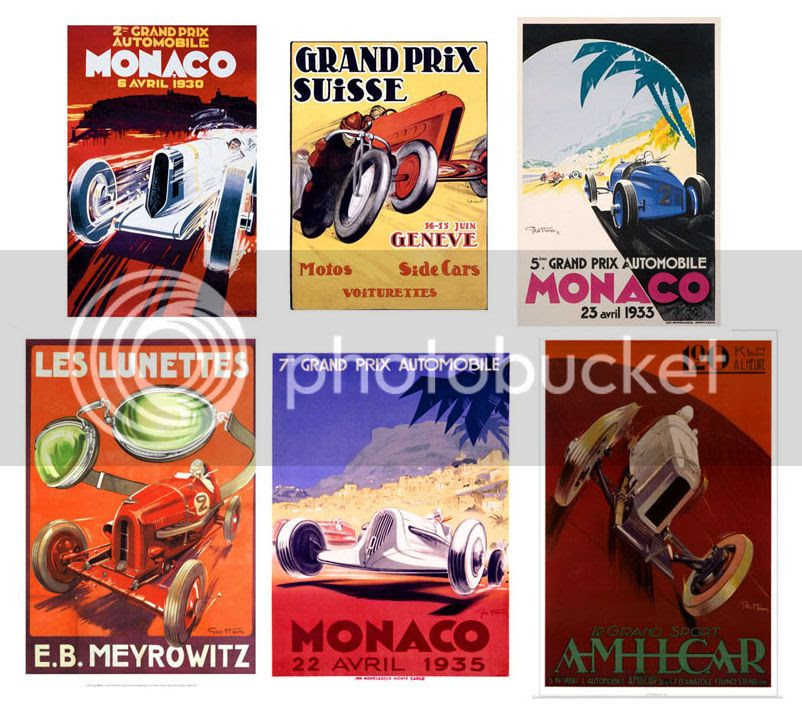 Two of my attempts at dressing my composition up in Ham/Vintage rail styling are shown below. 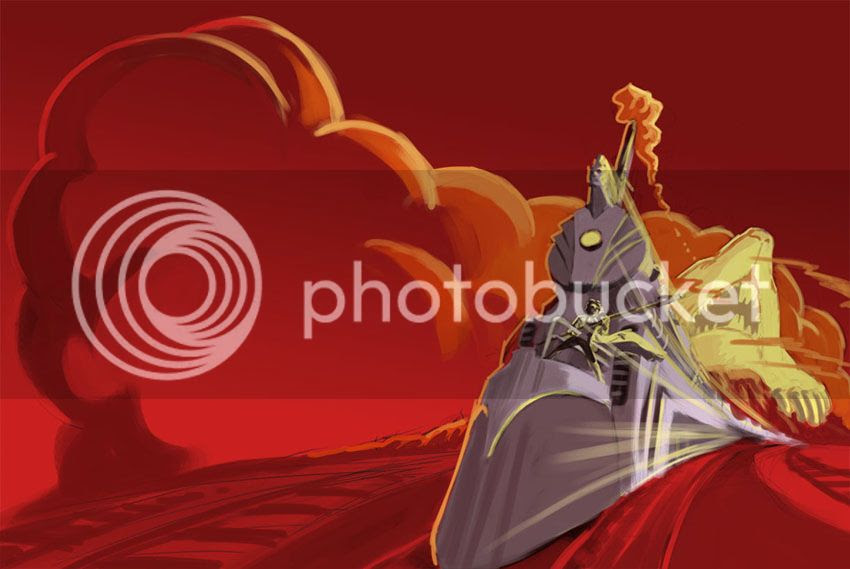 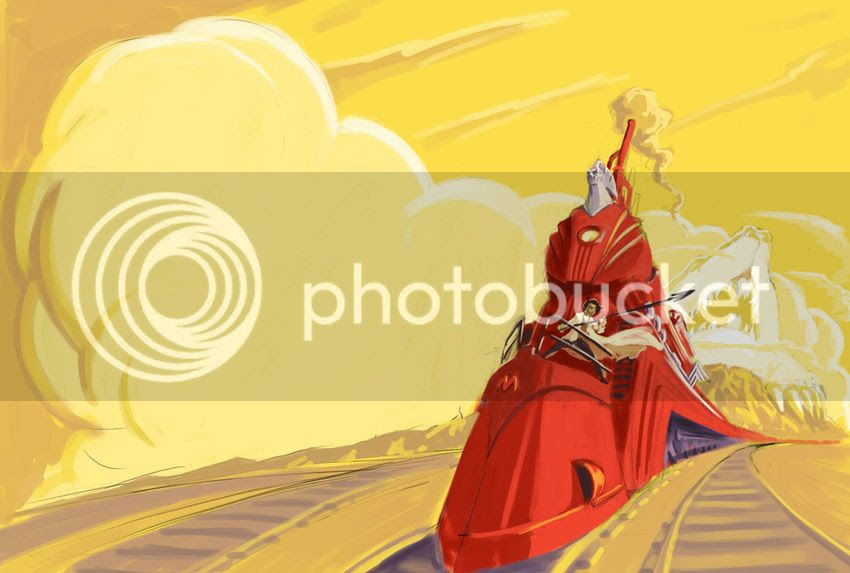 It was a fun exercise but I'm not entirely sure I'd have been the best person to execute this style had it made it to the final stage. None of this was to prove a concern however as it was later decided that this route was to be retired to the sidings in favour of route 2... which we'll meet in the next post.

Posted by Leighton Johns at 8:34 am 1 comments