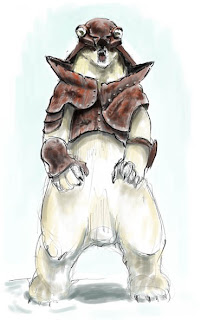 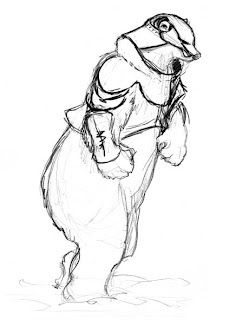 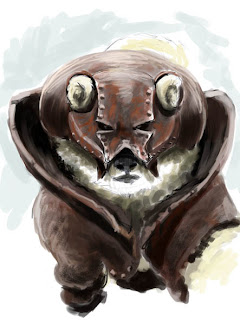 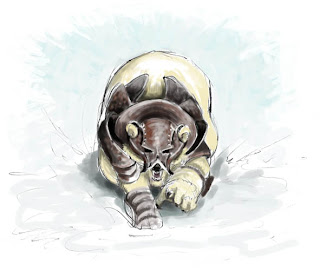 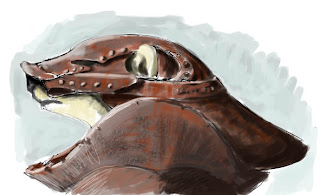 As a follow up to yesterday's post here are some of the sketches I did for my initial Armoured Bear illustration a couple of years ago. These were done very quickly as I remember, I was just trying to work out how the whole armoured plating thing would work on a polar bear. I was looking at a lot of books on armour worn by horses in battle, but looking at it now it seems more influenced by the gear worn by the Uruk-Hai and Attack Trolls from Peter Jackson's Lord of the Rings films.

I've just realised its Halloween and I should probably have posted something with more of an appropriate theme. Well there's always next year, and anyway an armoured bear would scare the hell out of me if it came trick-or-treating. I'll post something scarey soon. Probably on Christmas Eve.

Happy Halloween
Posted by Leighton Johns at 7:09 am 1 comments 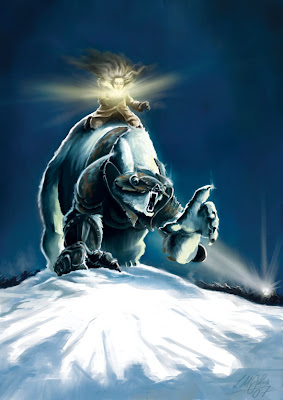 This is a recent reworking of an illustration I did a couple of years ago. The first attempt can still be seen on my website. Its based on characters from Phillip Pullman's Northern Lights novel (The Golden Compass - US). I was reminded of it recently with the current hype surrounding the forthcoming film version. I saw the film poster in our local cinema featuring Lyra and Iorek Byrnison the armoured bear. I have to say I still sort of prefer my design for the armour (even if you might mistake my bear for a large angry badger) but I suppose we'll have to wait for the film's release in December to judge what it looks like in action.
Posted by Leighton Johns at 11:19 am 0 comments